Yesterday I practiced all day at Nexus Racing and did a lot of testing. The track seems to have lost some traction which could be due to the lack of racers being on it. Last Saturday’s race was cancelled due to the freak snow storm Georgia got so the track hasn’t seen as much action as usual. Most of the time, I have to be careful of traction roll coming out of the sweeper but the car was planted all day. 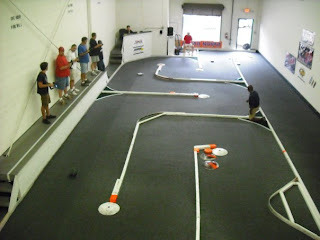 I first played around with front roll centers as the car was pushing at corner entrance. I found that making the camber links steeper gave the car more turn in but lost some on power steering at mid and corner exit. When I dropped the front camber link to the outside inner hole, the car gained more front bite and was easier to drive. It really helped make the car feel balanced throughout the corners. A local racer suggested I also raise the rear camber link on the hub by 1mm to make the car roll more. This instantly made the car faster by 0.2 sec while keeping it balanced. 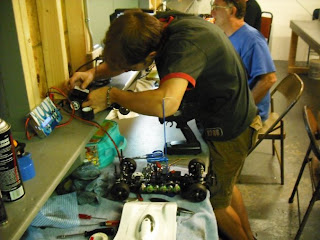 I reduced the rear toe from 3 deg to 1 deg. While it gave more steering throughout the corner, the rear end had no grip. I switched to 2.5 rear toe and this brought the rear end in more while giving more steering. I need to do more testing and see if this improved lap times and/or consistency.

Last, I made the wheelbase shorter which upset the balance of the car but made it faster. I’ll probably stick to the shorter wheelbase and practice with it more to build consistency.

I couldn’t believe how fast some of the Tekins are running now. Before the v2.03 update, the KO (which I run) and the Tekin were basically the same. Now, I’m getting blown by half way down the straight by the more well tuned Tekin setups. KO – c’mon guys give us more power!

Overall, it was a really fun day. It’s such a stress relief to leave town for the day and focus on nothing but the car and hanging out with everyone. Everytime I return from the track, I feel so refreshed but then again it’s hard to get back on focus because I’m still excited from the day!