Normally I mount my bodies 5mm more forward then standard position, looked from the front wheels. The wing is mounted 10mm further back then the bumper which is in the rules.

I always start the wing to be 10mms behind the bumper. On the speed6 it will be farther back than the stock location dimples. 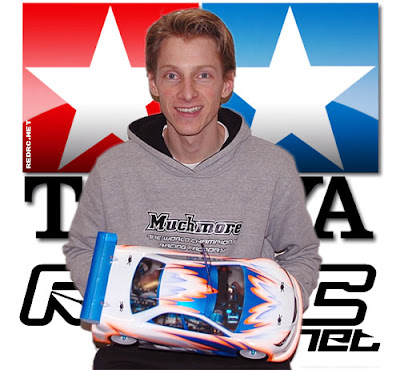 For me the wing position is a special tool to ballance your low speed and high speed steering. having the wing back or forward will effect steering in all places but it doubles or tripples its effect at higher speeds, where as a set up change is normally more across the board with high speed and low speed.

So it is a adjustment in a different demention from a chassis set up change which makes it valuble to me.

I first take a tall straight edge and stand it up behind the car, I then allign the straight edge with the wing (upper most lip of the wing). then i use a hudy droop block which is 10mm and slip it between the straight edge and the rear most bumper. it will be within 1mm every time. If you are having problems holding everything straight while measuring you can use double sided tape on the wing to hold the wings position while measuring, then just re-set the tape untill you get your proper 10mm. once its straight you can partially ream threw the wing, tape and bairly in to the body to make your dimples, remoove the tape, ream the holes properly then your all set. (all information taken from RcTech.Net forum)